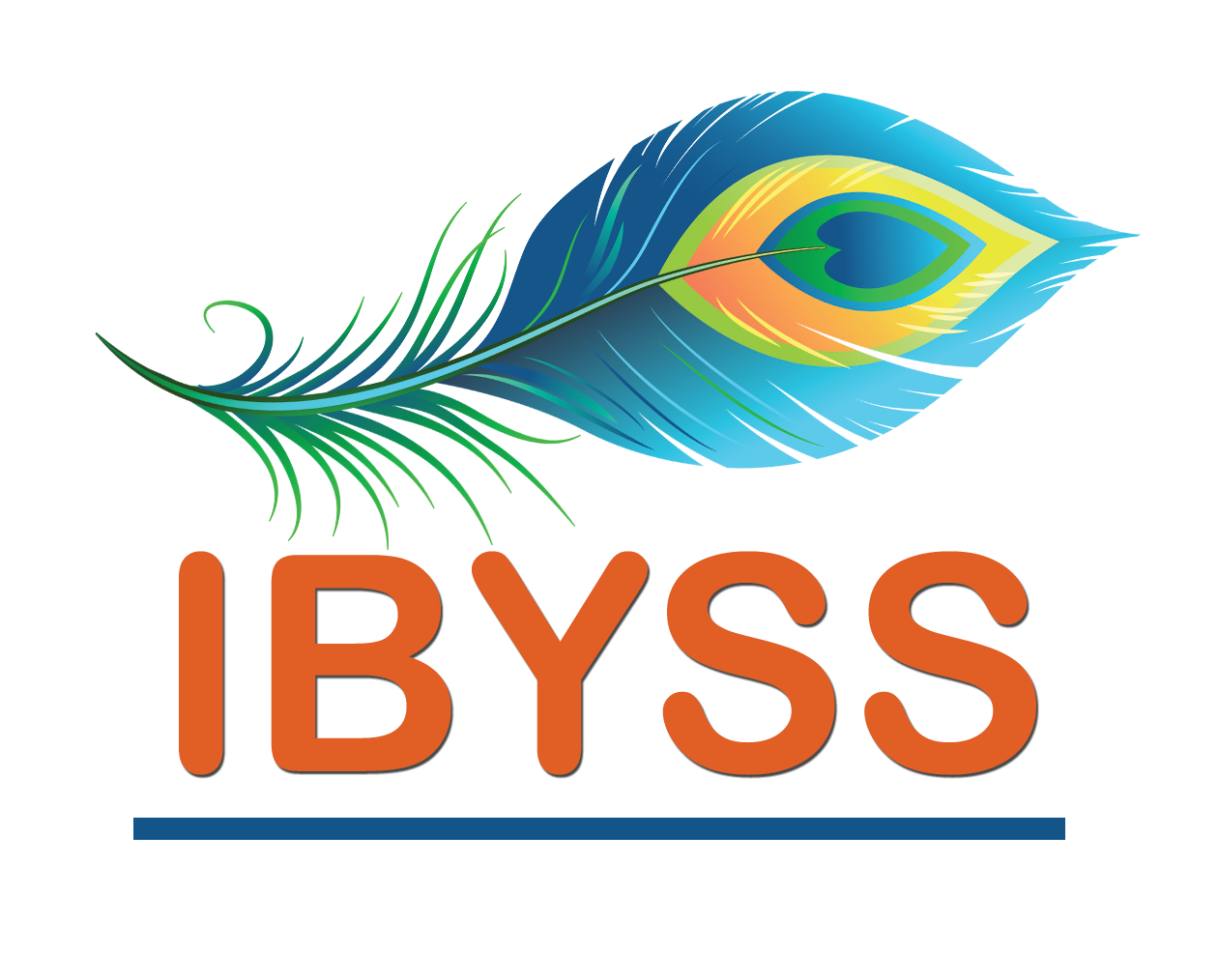 The holy land of India has always been blessed with the appearance of great saints. Jagadguruttam Shri Kripalu Ji Maharaj is one of those Divine personalities, who graced this holy land with his Divine presence. He appeared in Mangarh (a small village in Northern India) as Ram Kripalu Tripathi, on the auspicious midnight of Sharat Poornima in the year 1922, as the son of Sri Lalta Prasad Tripathi and Mother Bhagavati. His sweet smile and serene looks delighted the hearts of everyone around Him. His extraordinary virtues and childhood plays heralded His glorious future and worldwide fame as a Divine luminary. 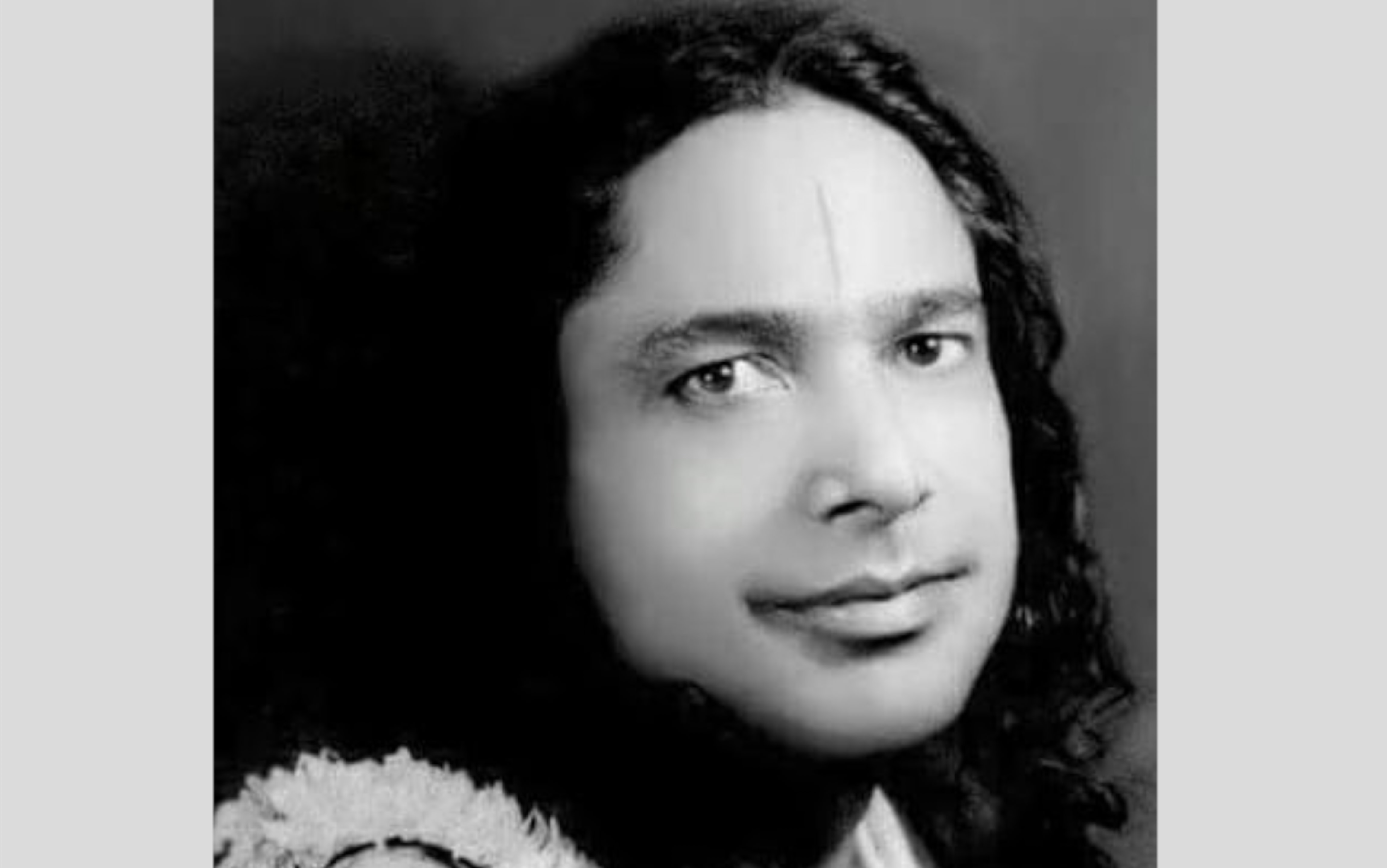 At the age of sixteen, He finished His formal studies and almost overnight, transformed himself from a naughty and charming young boy to a Divine personality, who remained forever engrossed in Divine Love. He disappeared into the dense forests near Sharbhang Ashram in Chitrakoot, and from there travelled into the forests near Vanshivat in Vrindavan, gracing the deserving souls by revealing the true form of Divine love towards Shri Radha-Krishna. During this time, He remained immersed in the ecstasy of Divine Love, being completely oblivious to the outer world. Seeing His state of Divine Love, people often referred to Him as, “Paramhans Ji”. 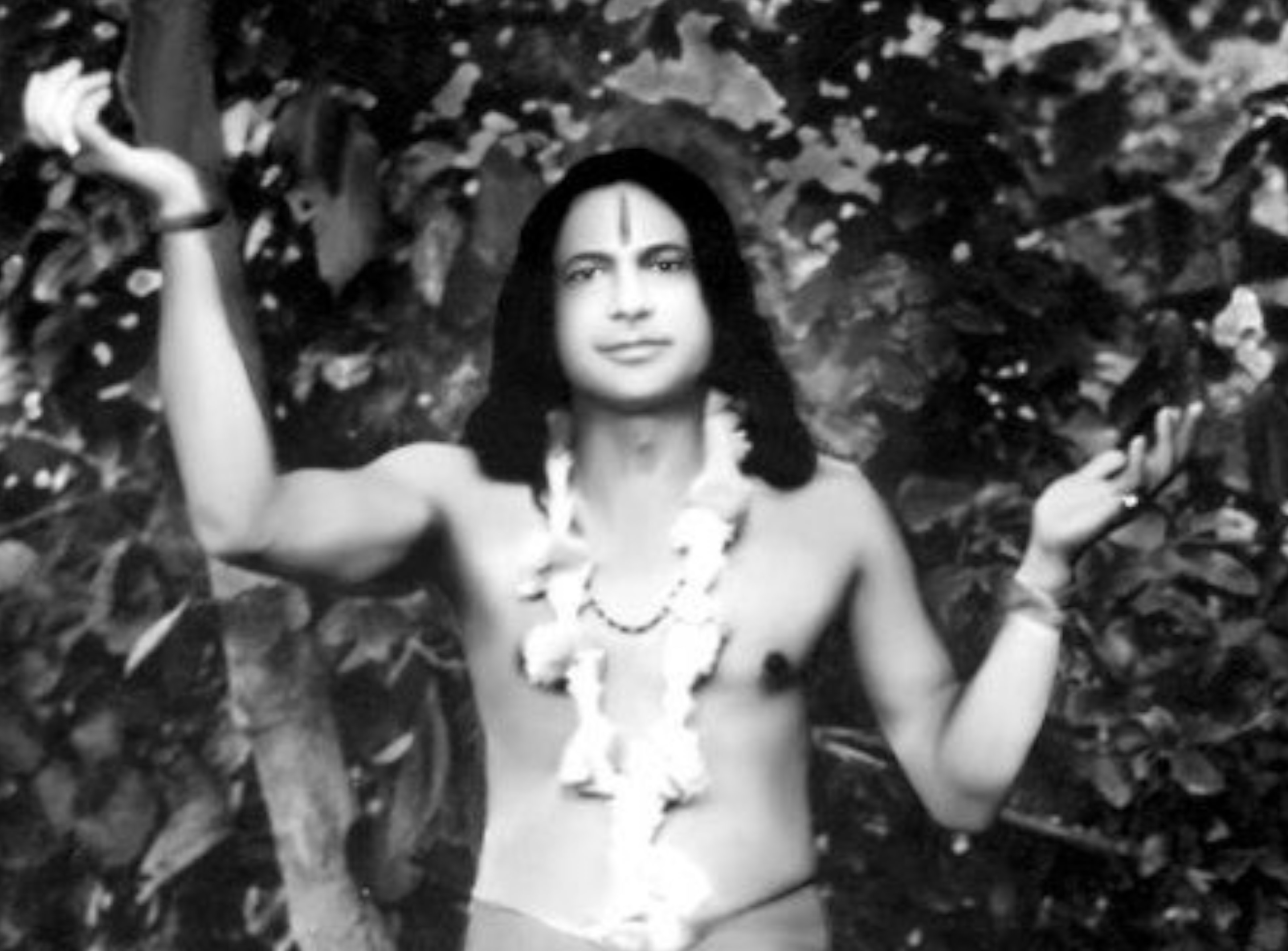 At about the age of 20, He started organizing group Keertans amongst the common pubic. Even though, He did not deliver any formal discourses, He explained the true method of performing devotion through His devotional songs and chantings. His key message was, “Roopdhyan” (focus your mind on the Divine form of God), with a feeling of humility and shed tears in loving remembrance and longing for God. This message was clearly understood by his devotees, observing His own expressions of devotional ecstasy. He discarded rituals and initiation (Guru Deeksha) as a way to progress on the path of devotion. This brought about a tremendous revolution in the spiritual realm. 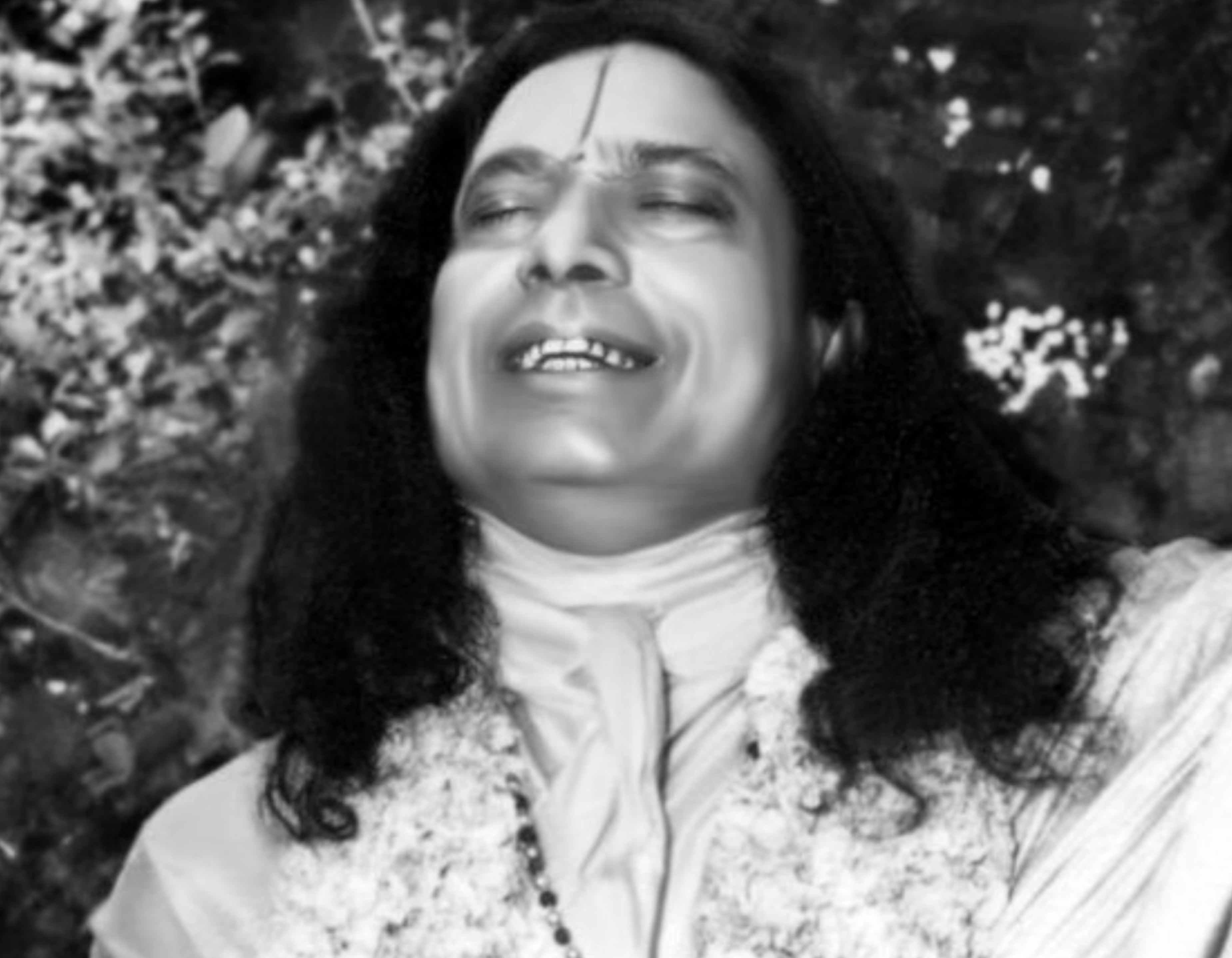 In the early 1950’s Shri Maharaj Ji was regularly invited to participate in spiritual conferences. During these conferences, Shri Maharaj Ji noticed that even the most well decorated and renowned spiritual leaders of those times, were not well versed with the true form of devotion and Vedic philosophy, thereby unable to show the right path to the common public. This abject lack of spiritual awareness amongst the society at large, inspired Him to start propagating the real philosophy of devotion recommended by the Vedas and other holy scriptures. 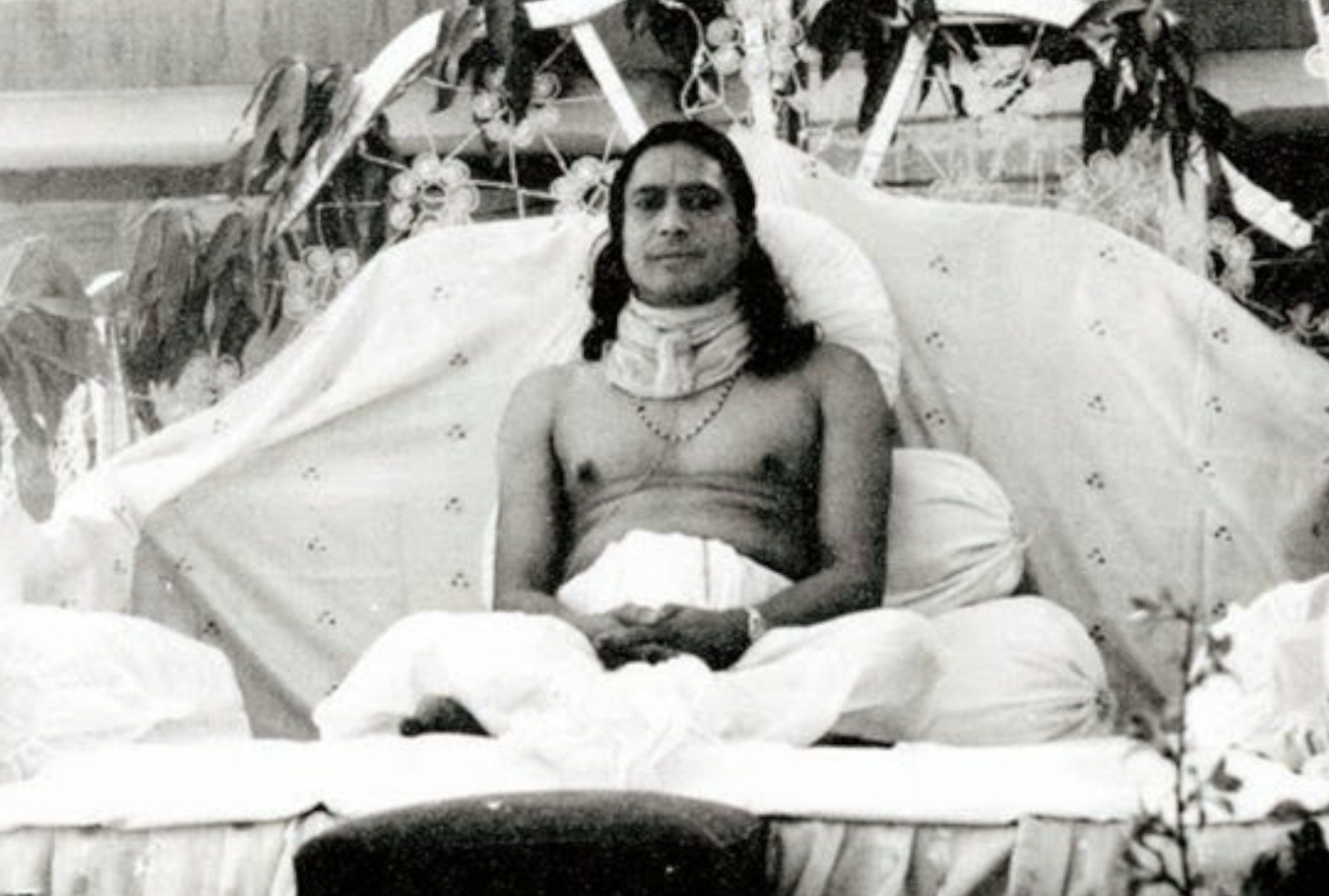 In 1955, Shri Maharaj Ji organized a huge convention in Chitrakoot in which he invited the leading spiritual leaders and scholars from Varanasi and other parts of India. He organized one more convention in Kanpur in 1956, which attracted the attention of most eminent philosophers of India including Sri Sarvapalli Radha Krishnan (then president of India) Sri Gulzari Lal Nanda (Prime Minister of India), Pandit Giridhar Sharma and Raj Narain Shastri (Kashi Vidvat Parishat). These scholars marveled at his amazing scriptural omniscience and accepted that they were fascinated by his remarkable memory and mastery of all Hindu scriptures. 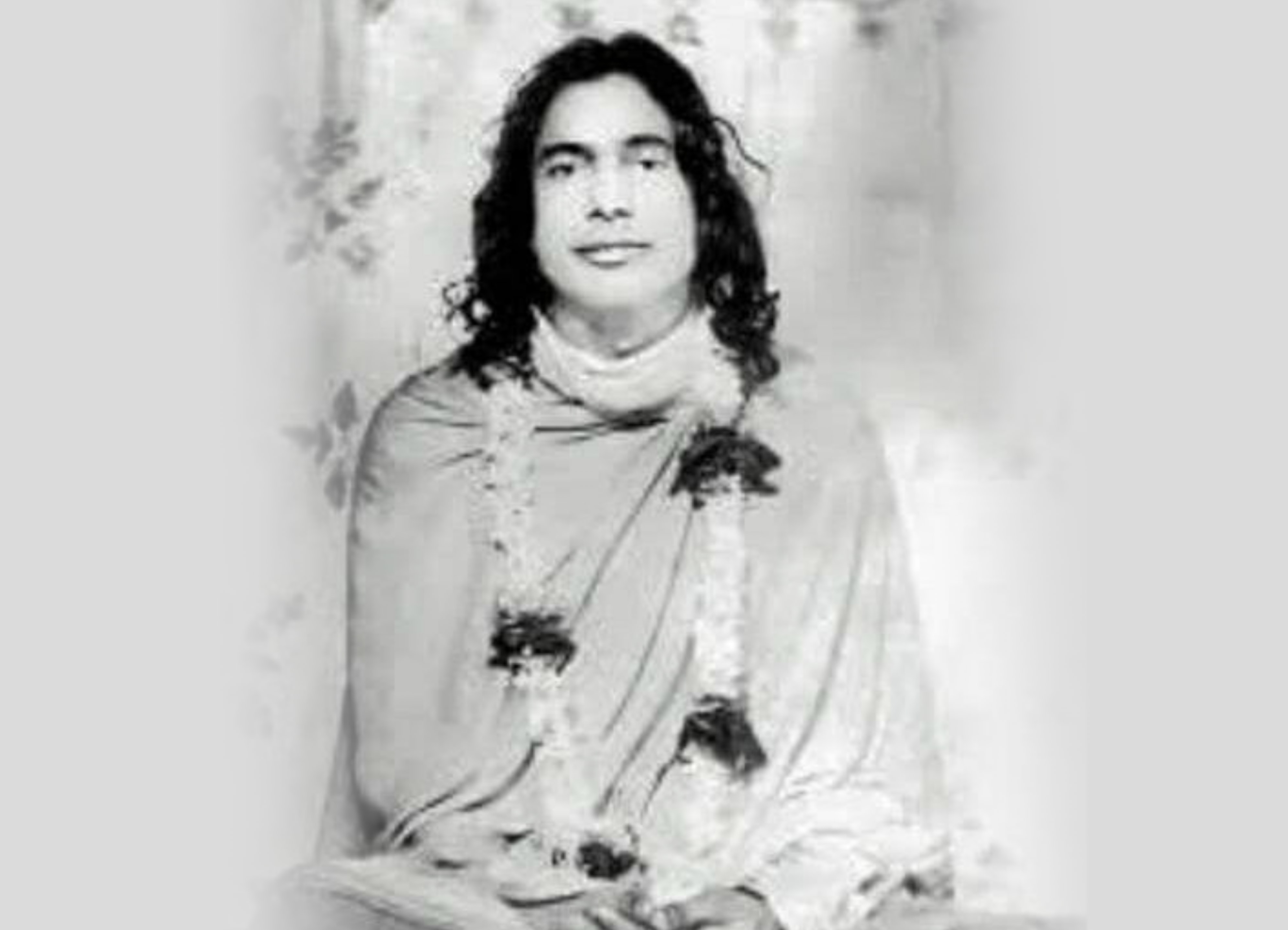 In Jan, 1957, Kashi Vidvat Parishat, an exclusive body of 500 most knowledgeable, highly revered Vedic scholars, invited him to Kashi (Varanasi) to deliver a series of discourses. Shri Maharaj Ji delivered the series of discourses in the most profound Vedic Sanskrit, which left the scholars speechless. With profound admiration, the scholars accepted Shri Maharaj Ji’s knowledge to be deeper than the combined knowledge of all of them. They accepted the fact that it is not possible for any human being to acquire such knowledge. They then declared that His knowledge was Divine, and thus inferred that He had to be an incarnation of God Himself, descending in the human form for the upliftment of human-kind. 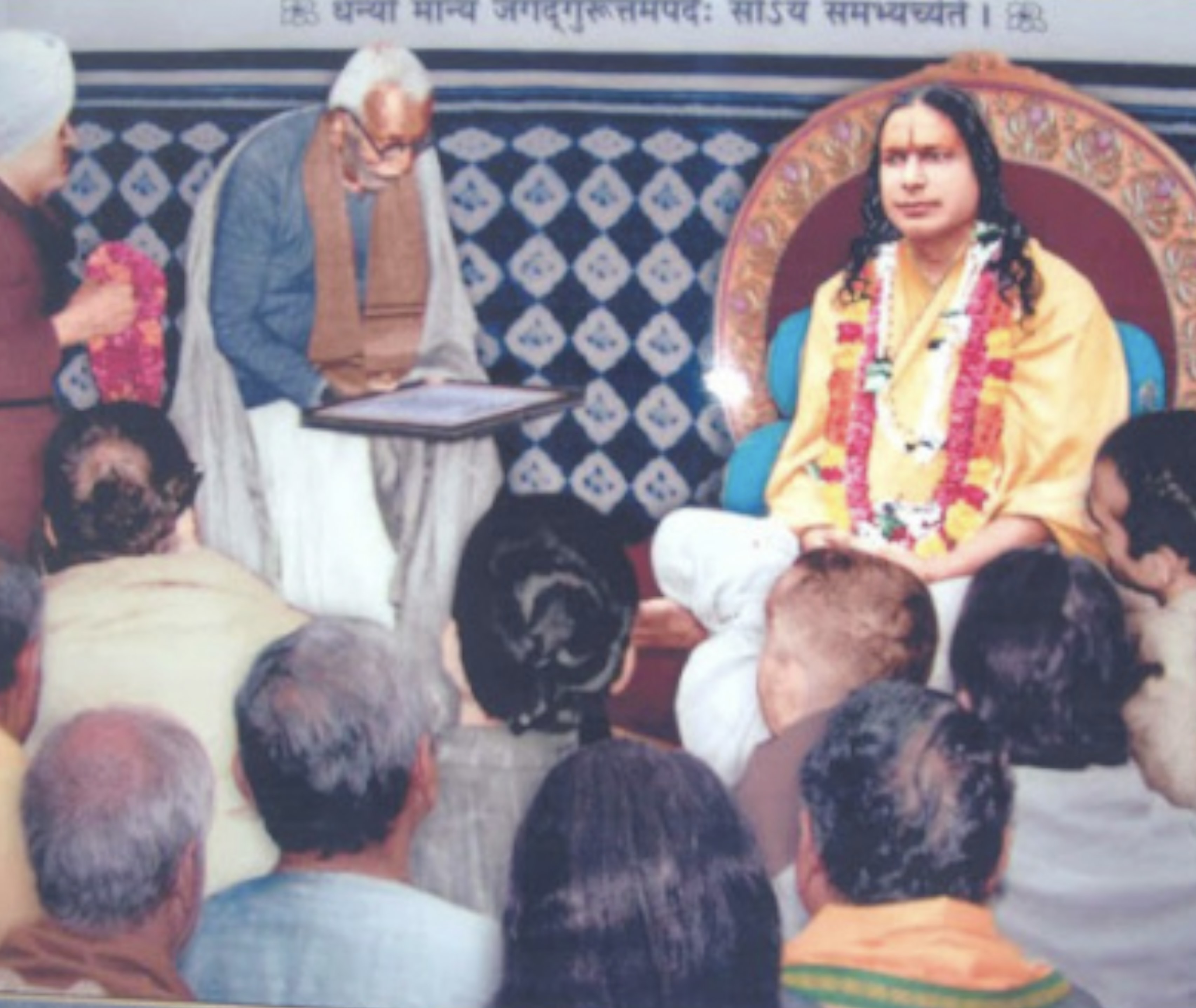 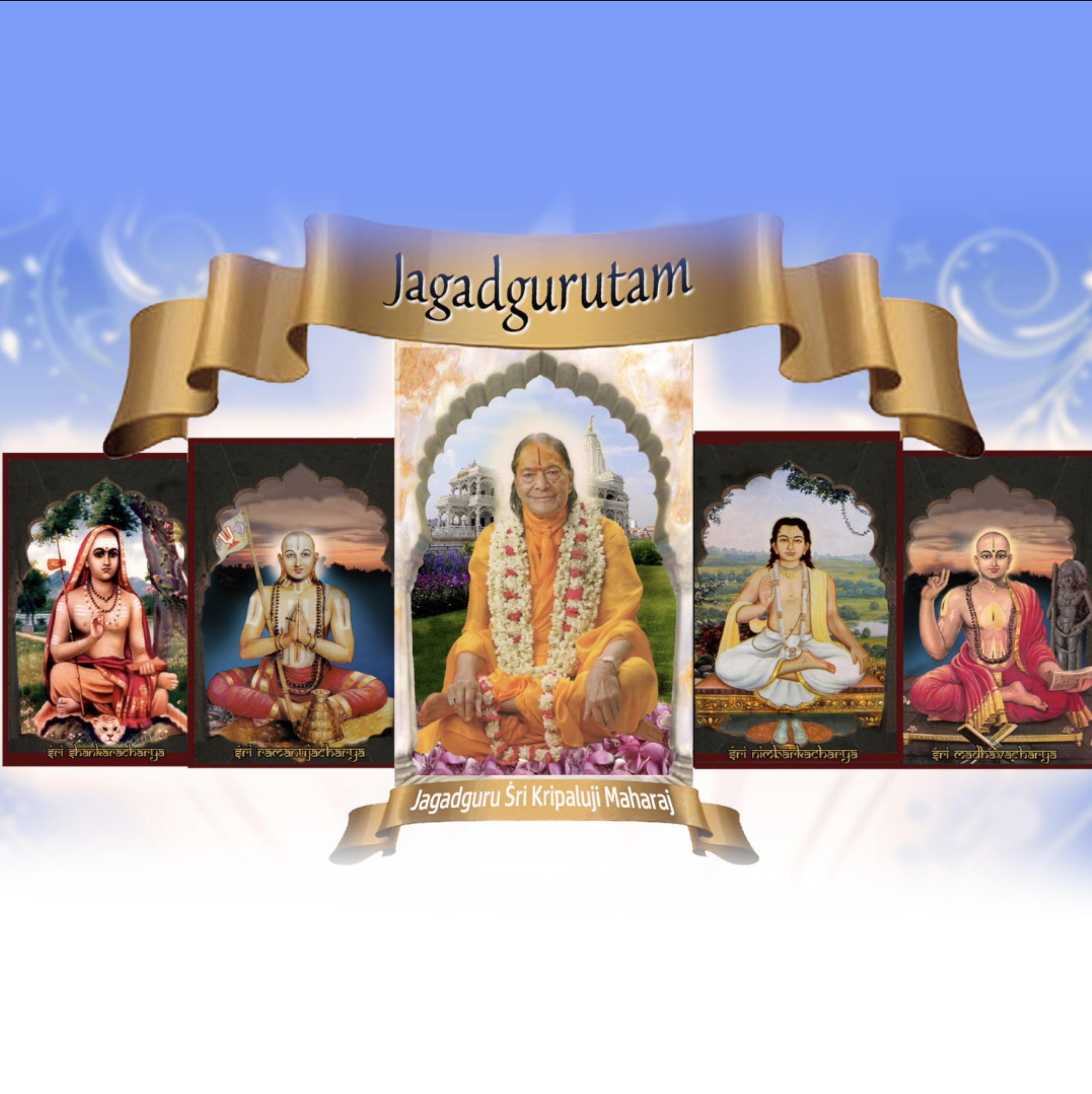 After a gap of over 750 years, Shri Kripalu Ji Maharaj was honored with this title. In addition, a suffix was added to his title “Uttam” (best) making him “Jagadguruttam”. Five more sub titles were also conferred on him.

Traditionally, when a scholar puts forth his revolutionary viewpoint of philosophy, which is distinctly different from the philosophy being professed by other contemporary scholars, the scholars challenge him to a scriptural debate. When the authenticity of the scholar with distinguished views becomes clear and obvious, all scholars gladly confer upon Him the title of Jagadguru, just as it happened in the case of 4 prior Jagadurus. 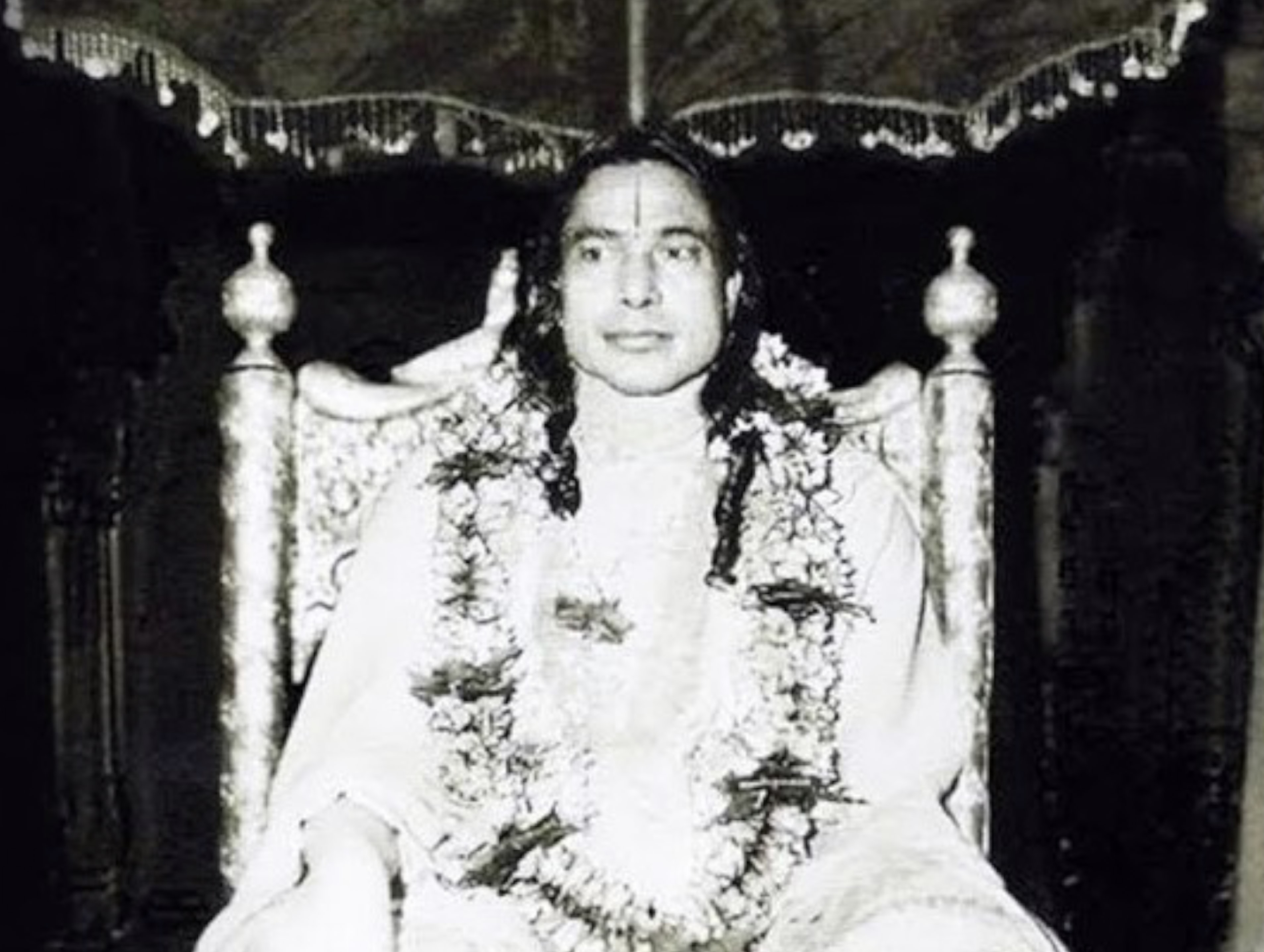 Following are the reasons, why the 500 great scholars of Kashi Vidvat Parishat conferred upon Kripalu Ji Maharaj, a title higher than a Jagadguru i.e. the title of “Jagadguruttam” (supreme amongst all Jagadgurus):
All other Jagadguru propagated only one doctrine. They lay emphasis only on their professed philosophy and proved their path to be the most genuine for God-realization. Shri Kripalu Ji Maharaj is the first Jagadguru who proved the authenticity of the philosophical concepts of all previous Jagadgurus, saints, scholars and scriptures. In addition, He established His own views with logic, while providing scriptural evidences based on quotations from the numerous Vedic scriptures. He also explained the benefits of the various systems of philosophy. That is why he was honored with an additional subtitle of “Nikhildarshan Samanvayacharya” (Adept reconciler of all philosophies). 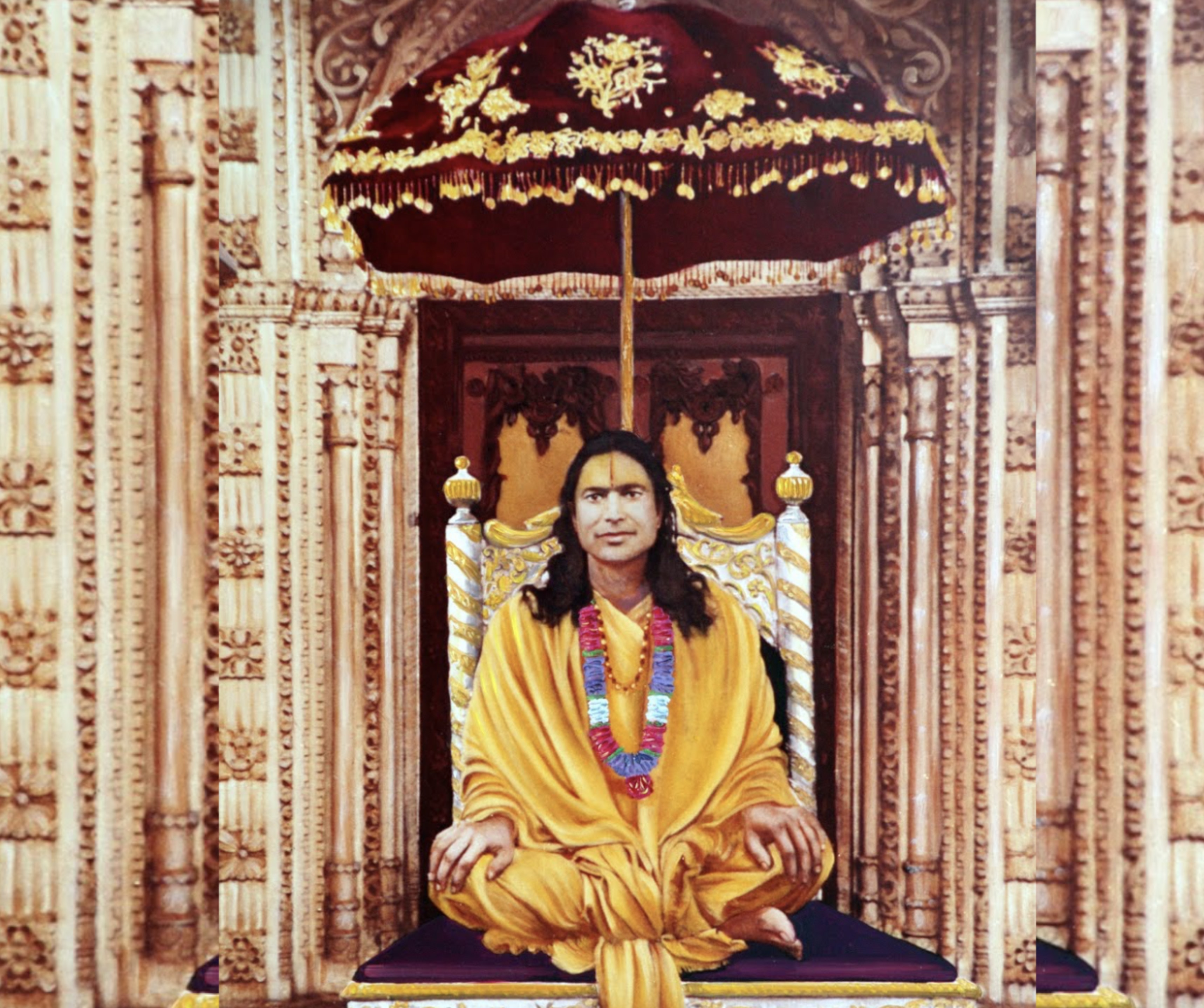 The prior four Jagadgurus, primarily focused on delivering knowledge. They did not lay much emphasis on the practical aspect of devotion. Shri Kripalu Ji Maharaj is the first Jagadguru, who has paid equal attention to both. His unique philosophy, which is simple, idiomatic and full of examples from daily life, is being propagated in the entire world. His philosophy is not confined to Hindus. It is equally feasible for people of all castes, creeds, nationalities and religion.

At the same time, He is endowed with the profound knowledge of philosophy of devotion. The symptoms of ecstasy of Divine love was seen occurring very often in His body. He propagated the highest form of devotion known as “Raganuga Bhakti” and explained the profound secrets of such bhakti and the scientific method of performing it in a very simple easy to understand manner. This was never done by any other Jagadguru prior to Him. That is why Kashi Vidvat Parishat honored with an additional subtitle of “BhaktiYog Rasavtar” (personified form of the nectar of devotion). 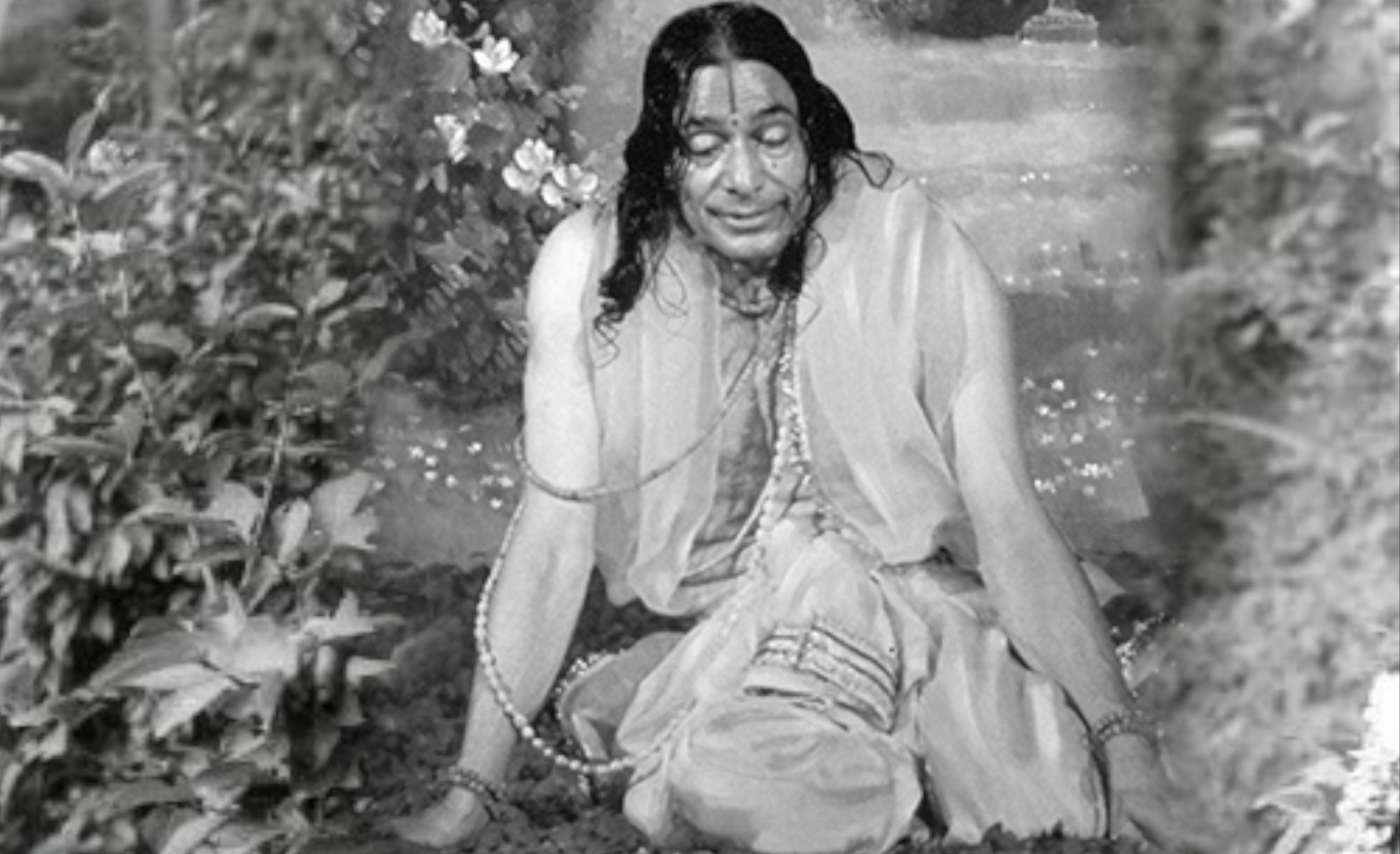 All other Jagadgurus had to prove their authenticity by defeating the top scholars of that time in long term debates. Shri Kripalu Ji Maharaj is the first Jagadguru, whose relatively few discourses were enlightening enough to reveal His Divine knowledge and amazing memory. The congregation of 500 top most scholars was bound to admit that His knowledge was much deeper than the combined knowledge of all of them. This also happened for the first time in the History of Jagadgurus. 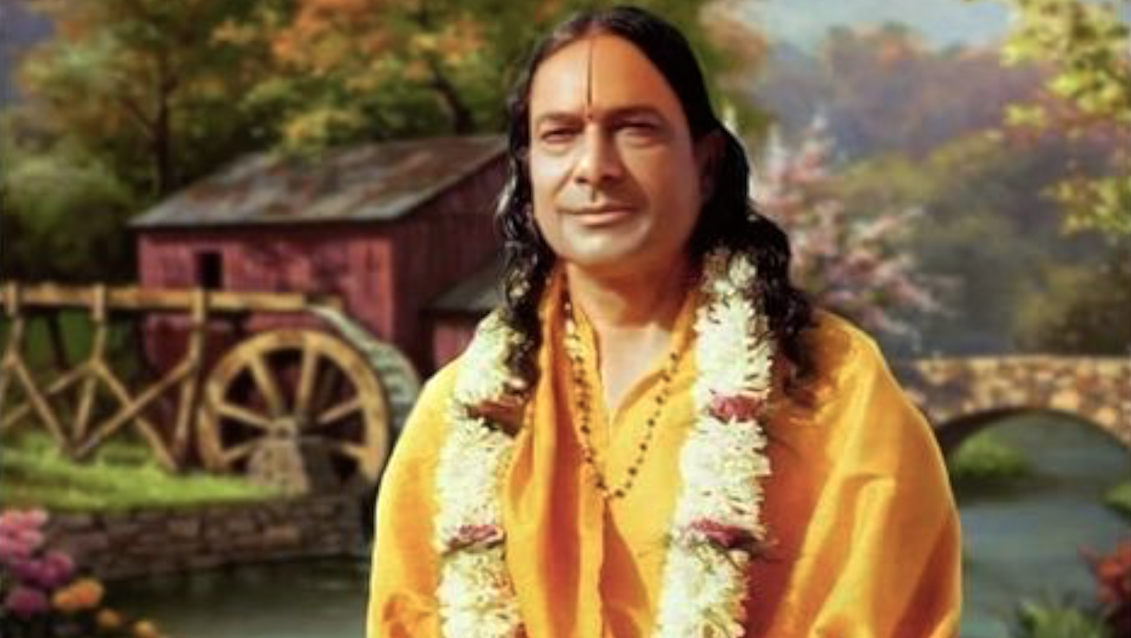 Having observed all these unique qualities in Him, the eminent scholars of Kashi Vidvat Parishat, honored Him in a worthy manner, deserving of his eminent stature. They also declared that His philosophy was a comprehension of all the philosophies and hence conferred upon him, the title of “Jagadguruttam”.

Jagadguru Shri Kripalu Ji Maharaj, lovingly known as “Maharaj Ji” by his devotees, worked tirelessly towards the upliftment of humankind, by spreading the message of divine love and freely distributing the profound knowledge of the Vedas in a very simple, easy to understand language. He taught practical ways of practicing devotion while living in this material world and performing regular household duties.

To propagate the philosophy of Divine love, Shri Maharaj Ji established three beautiful temples: Bhakti Mandir in Mangarh, Prem Mandir in Vrindaban and Keerti Mandir in Barsana. The structure, beauty, serenity and magnificence of these temples is unparalleled.

Shri Maharaj Ji believed that a healthy mind resides in a healthy body. He was also acutely aware of the hardships faced by the poor and needy living in backward villages in India. His heart melted seeing the plight of the girls from poor families who were forced to work in the fields and tend to their families needs, deprived of even basic education, due to the poor financial situation of their families. Consequently, Shri Maharaj Ji started a worldwide organization Jagadguru Kripalu Parishat (JKP) to further the cause of the poor and needy through organizing various philanthropic projects. 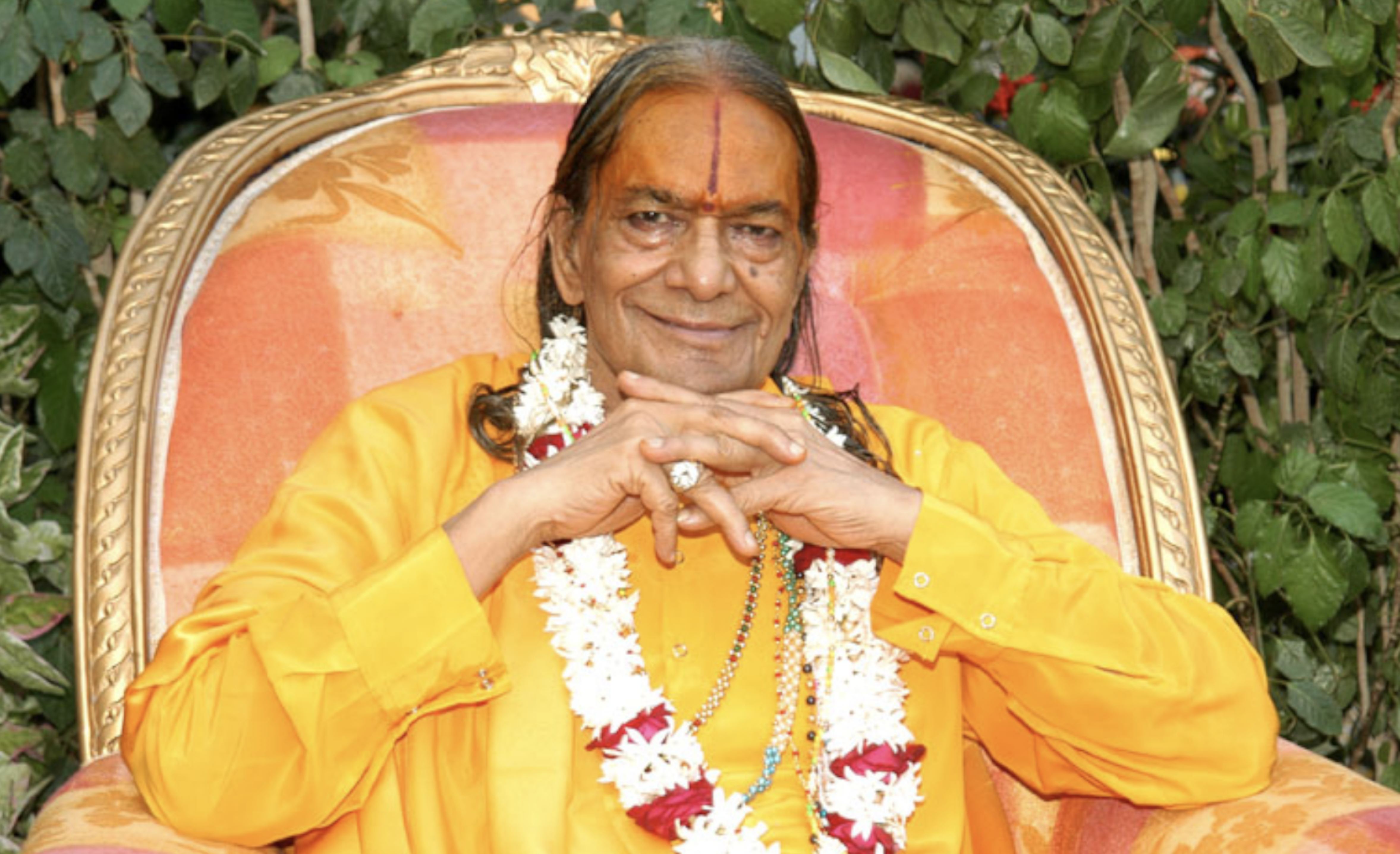 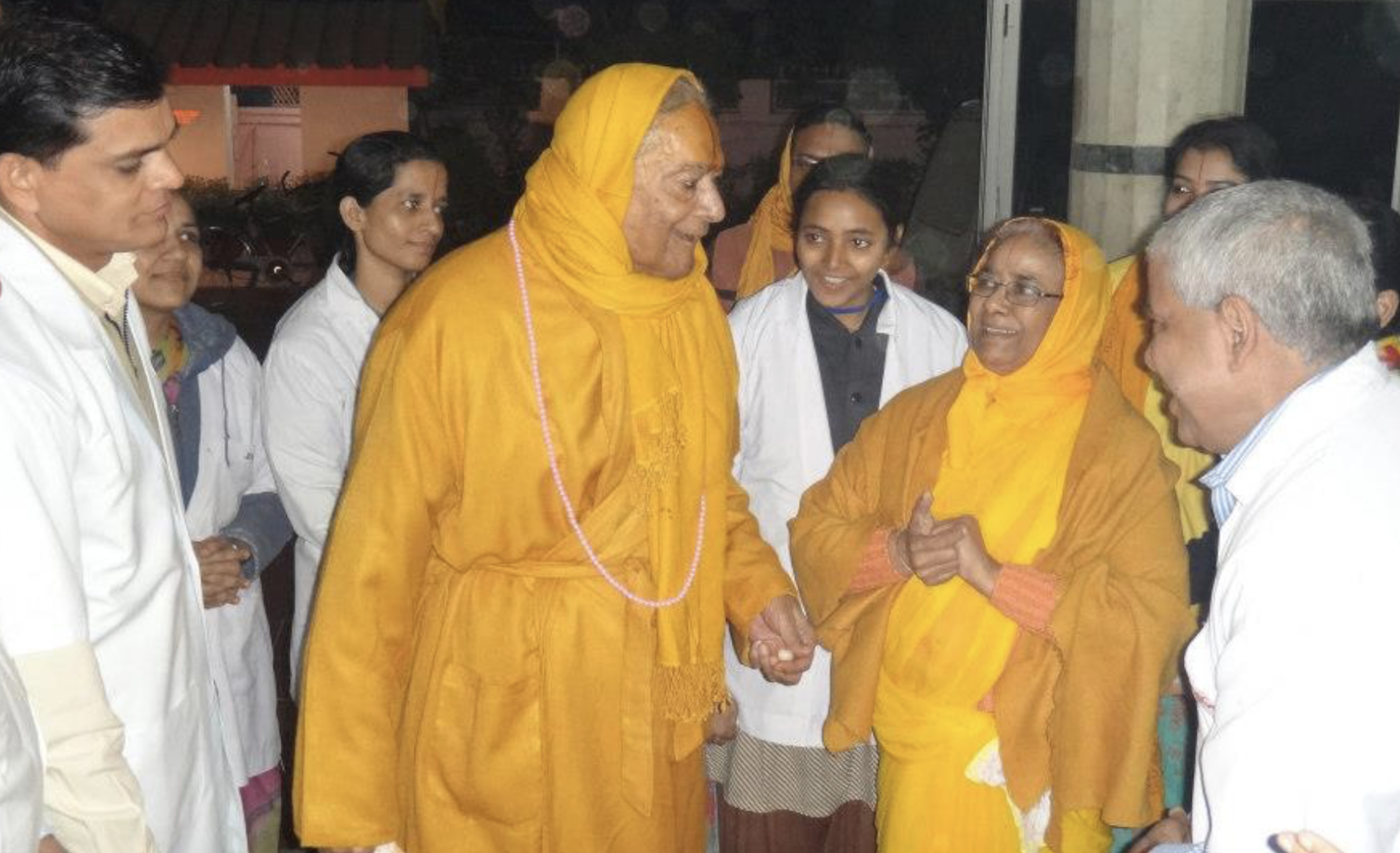 Shri Maharaj Ji, concluded his time on this earth on Nov 18th, 2013, leaving behind for us His divine teachings in the forms of hundreds of philosophy books, keertans, and other publications, propagating the philosophy of selfless Divine love and spreading the loving name of Shri Radha Krishna.